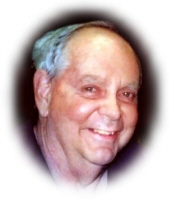 STOUGHTON , MA - Curtis R. Topper, Jr., 73, died Sunday, July 13, 2008 at New England Sinai Hospital. He leaves his former wife Jeanne Topper Alsop. Curtis was born in Hanover, PA on December 5, 1934 to the late Curtis Richard Topper, Sr. and Genevieve Martha Burkee Topper. He is the father of David Richard(Jeanne) Topper and the step-father of Clay (Judy) Seekamp and Tracy (Duane) Butson. He was raised in Meriden and later moved to Deerfield Beach , FL and then went to Brockton, MA in 2000 to live with his son, David. He worked for his family's cigar company, Topper Cigar Manufacturing, for many years as well as doing carpentry work. He was also a NASCAR enthusiast and loved to collect sports cars including his pride and joy a Grand National. Mr. Topper was a member of the Paralyzed Veterans Association and several American Legion branches and AVFW posts. Mr. Topper also arranged to bring back a German Maybach Staff car from Germany that now resides as a collector's piece in a museum. He was predeceased by a brother Frank (Donna) Topper. He also leaves 2 grandchildren, Lauren and Michael Topper of Brockton., sisters Genevieve (Gene) Belinski of East Berlin, PA, Joan (Bob) Rancourt of Wallingford and Edith (Jim) Stone of Avoca, MI and a brother Robert (Juanita) Topper of Camden, ME. He had many nieces and nephews. Funeral from BEECHER & BENNETT-FLATOW FUNERAL HOME, 48 Cook Ave., Meriden, CT, Thurs., July 17 at 9:15 a.m. A Mass of Christian Burial will be celebrated in St. Joseph 's Church at 10 a.m. The Fr. Shawn Daly will officiate. Burial with military honors will follow in St. Laurent Cemetery . Relatives and friends may call Wed. from 3 to 8 p.m. Contributions may be made in his memory to the Foundation for National Spinal Cord Injury, 11230 White Lake Rd. , Fenton, MI 48430.