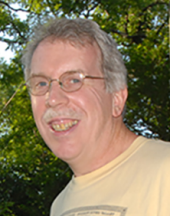 Daniel P. Younger of Mt. Vernon, 62, died on Monday, January 18, after a brief and valiant struggle with cancer. Dan was the former director of the Knox County Historical Society Museum and former director of the Olin Art Gallery at Kenyon College. He also taught several courses in museum studies and history of photography at Kenyon. Before that he was the director of publications for the Photographic Resource Center at Boston University and editor of its journal, editor of several books, and author of several critical articles. Dan was born in Columbus to the late Sally (Farrell) and Robert Younger, and grew up in Montclair, New Jersey. He was a 1976 graduate of the College of Wooster and received a Master of Fine Arts degree from the State University of New York Visual Studies Workshop in Rochester. He was a professional photographer whose work was shown at the Columbus Museum of Art, the Semple-Upham Culture & Arts Center and the Schnormeier Gallery in Mount Vernon, the Pomerene Center for the Arts in Coshocton, the Dayton Visual Arts Center, and various galleries in New England. At the Olin Art Gallery he curated many imaginative exhibitions, with limited resources and space. He was also a serious collector and seller of antique children's books, an avid bicyclist, and an amateur star-gazer. His most recent project was a series of photographs of Knox County farm life. He is survived by his wife, Melissa Dabakis, Professor of Art History at Kenyon College, and his brother, David Younger, of Putney, Vermont. He will be dearly missed by his family and many friends. Friends are invited to visit with Daniel's family from 1-1:30pm on January 30, 2016 in the BEECHER & BENNETT FUNERAL HOME , 2300 Whitney Ave. Hamden, Connecticut, followed by a funeral service at 1:30pm. Interment to follow in Centerville Cemetery, also Hamden. Donations in his name may be made to the National Pancreatic Cancer Foundation in Longmont, Colorado (http://www.npcf.us/donate/) and/or the Pancreatic Cancer Research Fund at the James Cancer Hospital (fund number 301352) in Columbus.