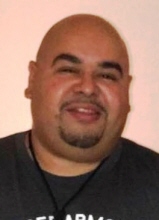 MERIDEN- Daniel Rivera, 45, beloved husband of Dawn (Pek) Rivera passed away unexpectedly on Thursday, February 9, 2017. He was born in Bridgeport on October 28, 1971, the oldest son of Emilio and Carmen (Negron) Rivera. Dan graduated from Bunnell High School in Stratford and had been working for Telrepco in Wallingford. He was a devoted, husband, father, son, brother, and friend. He always put his family first and would lend a hand to anyone in need. In addition to his wife Dawn, and his parents, he is survived by two daughters, Alyssa and Jenna Rivera of Meriden, two brothers and their wives, Leonard (Susann) Rivera of Milford and Edward (Lisa) Rivera of Stratford, and his grandmother, Genoveva Fernandez. He also leaves a special friend Noah Brassell, who was like a son, as well as many aunts, uncles, nieces and nephews. He was predeceased by a grandmother, Edelmira Reyes. Relatives and friends may visit with the family on Wednesday, February 15, 2017 from 2-4pm at New Life Church, 350 High Hill Rd., Wallingford, CT. A funeral service will follow at 4pm. Burial will be at the convenience of the family. The Beecher & Bennett-Flatow Funeral Home, 48 Cook Ave., Meriden has been entrusted with the arrangements.