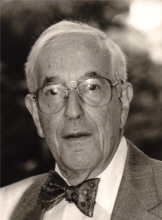 Daniel W. Kops, Sr. of Palm Beach, Florida, passed away peacefully, surrounded by the family he loved, on November 14, 2009 at Connecticut Hospice. He was 92 at the time of his death. He is survived by his wife of 62 years, Nancy, his sons, Daniel W. Kops, Jr. (Sandra) and Stephen R. Kops, a daughter, Cynthia Kops Merbaum (fiance Richard Pacini), seven grandchildren, one great granddaughter, eight nieces and one nephew. Born on August 7, 1917 in Lawrence, New York, he spent his childhood in New York City, where he attended the Horace Mann School. He matriculated at Cornell University, majoring in journalism. In 1939, his senior year, he served as editor of The Cornell Daily Sun. After graduation he began his career working as a reporter for the Houston Press. At the onset of World War II, he enlisted as a private in the U.S. Air Corps, rising to the rank of major. He served on a project developing ground radar. After the war he married Nancy and moved to Harrisburg, Pennsylvania, where he worked as a reporter for the Harrisburg Telegraph. Early on he recognized the potential role of radio to be far more than a vehicle for entertainment. He moved with his wife, Nancy, to New Haven and became a partner in radio station, WAVZ. In addition to expanding its news coverage significantly, he pioneered the use of radio editorials as a means of promoting ideas for the betterment of the community. During the 1950's and 60's his voice was heard regularly throughout the greater New Haven area advocating for public housing, fluoridation, freedom of information and numerous other causes. He served as a board member of the National Association of Broadcasters, and as Chairman of the Committee on Editorializing. The business expanded to include WKCI and two stations in the Albany-Troy area. He served as President of Kops-Monahan Communications, Inc. In addition to his role in promoting broadcast journalism, he worked tirelessly for the betterment of the New Haven Community. He served as President of the Greater New Haven United Fund, now known as the United Way and a trustee of Albertus Magnus College. He also served as a member of the boards of Yale New Haven Hospital, New Haven Symphony Orchestra, Visiting Nurse Association, New Haven Arts Council and many other numerous local boards. He also served on the board of the National United Way Association. His numerous awards include the Connecticut Broadcasters Association's Distinguished Service Award, the New Haven Chamber of Commerce Community Leadership Award, and the Connecticut Jaycees Man of the Year Award. A loyal Cornellian, he received an honorary degree from Albertus Magnus College and was a fellow at Yale University's Saybrook College. A graveside service will be held Wednesday, November 18, 2009 at 11:00 A.M. at the Grove Street Cemetery in New Haven, followed by a reception. In lieu of flowers, donations in his honor may be sent to the Connecticut Hospice, 100 Double Beach Rd., Branford, CT 06405 or the Greater New Haven United Way, 71 Orange St., New Haven, CT 06511. Funeral arrangements are in care of BEECHER & BENNETT, 2300 Whitney Ave., Hamden.