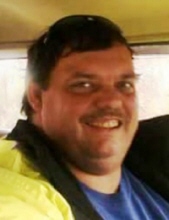 Danny Lee (Barrett) Gayken, age 50, of Durham, passed away on January 25, 2018. Born in Augsburg, Bavaria, Germany on January 3, 1968, he was the son of Silvia H. (Fleischer) Barrett and Richard B. Barrett of West Hartford; brother of Richard J. Barrett & his wife Andrea of Southington, Kimberley B. McCord & her husband Kent of Granby and Heather Gayken Wood of Van, Texas; maternal grandson of the late Wilhelm & Patricia (Teuber) Fleischer, and paternal grandson of Barbara B. Barrett of Niantic & the late James F. Barrett. Danny is also survived by several cousins, aunts, uncles, nieces and nephews. A former resident of Avon, West Hartford and Higganum, Danny enjoyed his hobbies; fishing, hunting and flea market shopping. He was employed as a Master Operator at McLain and Company in Middletown and will be missed by all his good friends and co-workers there. Friends may visit with Danny's family on Thursday, February 8, 2018 from 4:30 PM to 7:30 PM for a celebration of his life at Beecher & Bennett - Flatow Funeral Home, 48 Cook Avenue, Meriden.