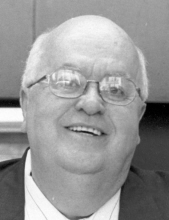 David Alan Pedersen, 68, of Shepard Ave, Hamden passed away on May 4, 2007. Beloved husband of 43 years to Lynda Bronson Pedersen. He was born in Warrens, WI on February 4, 1939 to the late Elvin and Ruth Dana Pedersen. Besides his wife, David leaves his three children, Robert Pedersen of Sheffield Village, OH and his wife Kelly, Jon Pedersen Sr. of Milford and his wife Kristen Adanti, and Krista Grande of Simsbury and her husband Matthew. Four grandchildren Angela Marie and Benjamin Oscar of Sheffield Village, OH, and Jon Jr. and Michael of Milford. Brother Tom Pedersen of Tomah, WI and his wife Grace, and Aunt Shirley Wittset also of Tomah, WI. David received his Bachelors degree at the University of Wisconsin-LaCrosse and his Masters at the University of Illinois, then continued his graduate work at the University of Denver. He became the Student Center Director at Bemidji State University in Bemidji, MN, and then continued as Dean of Students at the University of Wisconsin-Parkside in Kenosha, WI. In 1983 David moved his family to Connecticut to pursue a career at Southern State University. For the first 17 years he was Dean of Students, then retired in 2004 as Vice President for Student Affairs, a position he held for four years. Family, friends, and education were extremely important parts of David's life. This was proven as he became instrumental in planning the Michael J. Adanti Student Center at SCSU. He was also active in the church choir at Mt. Carmel Congregational Church in Hamden. When David wasn't working he greatly enjoyed relaxing with a book or writing poetry about people. His family and friends will miss his strong personality and loving nature. Funeral service at Bethesda Lutheran Church, 305 St. Ronan St., New Haven, Tuesday, May 8, 2007 at 11 a.m. Friends may visit with the family at BEECHER & BENNETT FUNERAL HOME, 2300 Whitney Ave., on Monday, from 4-8 .pm. Interment will be on Sat, May 12th in Warrens, WI. In lieu of flowers Memorial Contributions in David's name may be sent to the Southern Connecticut State University General Fund, 501 Crescent St., New Haven, CT 06515.