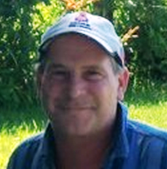 David is survived by his children, Meagan (Max) Stein of Roselle Park, NJ and David Charles Bartlett, Jr. of Virginia Beach, VA. He is also survived by his sisters, Mary (Michael) Ormsby of East Calais, VT, Julie Holuba of Wallingford, Ellen (Rodney)Beaulieu of Port St. Lucie, FL, and brothers William (Maria) Hinman Jr. of Meriden, John Hinman of Avon and Thomas (Ashley) Hinman of Northford.  In addition, David is also survived by his very special loving aunt, Mary Mousch of Meriden, with whom he lived for several years, and also by several nieces and nephews. He was predeceased by his very special partner, Lisa Mancino.

He attended Meriden schools and was an accomplished house painter who took pride in his work. He had a big heart and was always willing to help his friends and family whenever they needed it. David was very patriotic and loved the American bald eagle. He traveled to Vermont often to visit family and would stay for a month at a time. He was also an avid Philadelphia Eagles and New York Yankees fan. He will be greatly missed by all who knew him.