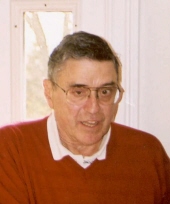 David L. Leonard, of Bethany, passed peacefully from this life with his family around him on June 25, 2007, he was 70. He was the beloved husband of 43 years to his wife Marguerite, and the loving father of Patricia (Kevin Pasley) of Bethany, John (Kate) of Trumbull, Robert (Elizabeth) of New Haven and Eileen (Mark Porter) of Bethany. He was predeceased by two sons, Thomas and Matthew. He is also survived by Jeanne Anne and David, children from his previous marriage. David was the proud grandfather of 13 wonderful grandchildren. His brother Michael Leonard (Kathy) lives in Corning, NY. David, born in Chicago, IL, son of Robert and Grace Leonard, raised in Hartsdale, NY. His achievements include: Eagle Scout Badge, Valedictorian and Class president of Stepinac High School in White Plains, NY, and full scholarship to Fordham University. David spent his business career in the chemical industry. After working at Dow Chemical and Union Carbide Corp. for 23 years, he then went on to work for, and eventually own part of Uniroyal Chemical Co., where he retired as Vice President and General Manager of the Plastics Division. David was devoted to his church, Our Lady of Assumption Parish, where he worked tirelessly. He was the past President of the Parish council and a member of the finance committee. In March, he was awarded the St. Joseph, Archdiocese Medal of Appreciation by the Archbishop for his service to the church. Funeral from BEECHER & BENNETT, 2300 Whitney Ave., Hamden, Friday, June 29th at 10:30 a.m. A Mass of Christian Burial will be celebrated at Our Lady of the Assumption Church, 75 Center Rd., Woodbridge at 11 a.m. Friends may call at the funeral home Thursday from 3 to 5 p.m. and 7 to 9 p.m. In lieu of flowers, memorial contributions may be made to the Community Soup Kitchen, 84 Broadway, New Haven, CT 06511.