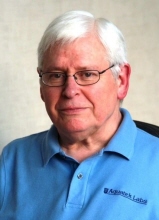 David Martin Graham, 72, of Woodbridge, passed away peacefully on April 26, 2016 with his loving family by his side. He was born in Waterbury December 4, 1943 to the late Clayton & Mildred Anderson Graham. David graduated from American International College in 1966 and received his PhD from Duke University in 1973. He was the owner and director of Aquatek Labs. David enjoyed traveling and was a basketball enthusiast. He was devoted to his loyal boxer companion. David is survived by his beloved wife of 43 years, Nancy J. Fratcher Graham; his son, Jeffrey Graham of Woodbridge; his daughter, Jennifer Graham & her husband Daniel Tontini of Orange, and grandchild, Cole Tonitini. He is also survived by his brother, Kenneth & his wife Bonnie Graham of Linesville, PA; his sister, Nancy B. Graham & her husband Gary Williams of Old Tappan, NJ; his uncle, Donald Anderson & his wife Jacky of Waterbury, and many nieces & nephews. Friends are invited to visit with the family on Saturday, May 14th from 11:00 to 12:00 p.m. at BEECHER & BENNETT, 2300 Whitney Ave, Hamden followed by a Memorial Service at 12:00 in the funeral home. Burial will be private. In lieu of flowers, contributions in David's memory may be sent to www.post-polio.org or http://poliooutreachct.com/index.html.