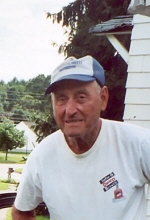 Meriden - David Wesley Bilger, 82 died on Tuesday, July 27, 2010. He was born on the family farm on April 29, 1928 a son of the late George and Emma (Brechlin) Bilger. David lived his entire life on the family farm which had been last working diary farm in Meriden. He worked almost every day on the farm, whether it was gardening, or cutting and baling hay in the summer with the help of the Westfield Rod and Gun Club. David was a 4H and Farmer's Bureau Member and enjoyed having friends and family stop by the farm. He is survived by a sister, Lucille Bilger of Meriden as many cousins and friends. He was predeceased by a brother, Allan Bilger. Relatives and friends may call at the Beecher & Bennett-Flatow Funeral Home, 48 Cook Ave., Meriden on Saturday, July 31, 2010 from 2-5pm. Burial will be private.