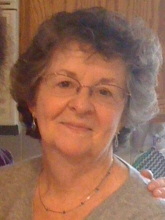 Diane A. Pomeroy, 73, wife of Bruce Pomeroy, passed away peacefully at home on July 15, 2015. She was born December 4, 1941 in Derby, CT a daughter of the late Gerard and Alice (Bombardier) Perras. Diane was raised in St. Albans, VT where she graduated from Bellows Free Academy. Upon graduation she returned to Connecticut with her sister Danielle and worked at Pratt & Whitney Aircraft where she met her loving husband of 52 years, Bruce Pomeroy. On June 29th, 1963 they were married at Our Lady of the Lakes Church at St. Albans Bay and then moved to Meriden, CT. Diane enjoyed spending time with her loving family and friends, especially her five grandchildren. She enjoyed opening her home for holiday cookouts and family meals, creating fond memories for all who attended. Diane thoroughly enjoyed traveling with her husband, friends and family, enjoying trips across the United States, cruising to Alaska and also a dream vacation to Hawaii. Diane had a green thumb and enjoyed working in her flower gardens and on occasion was known to take in plants for her special touch. Throughout her career, Diane worked at Pratt & Whitney, International Silver Co. and the Napier Co. in Meriden. In retirement, she worked part time for the Meriden Public Schools lunch program and volunteered at the Meriden Soup Kitchen. Diane had been a longtime parishioner of St. Joseph Church and more recently Holy Angels Church. In addition to her husband Bruce she is survived by a daughter Cynthia Pinheiro and husband Ron of Parker, CO, a son Nelson Pomeroy and wife Wendy of Meriden, five cherished grandchildren, Allison, Mary and Megan Pomeroy and Benjamin and Jonathan Pinheiro. She also leaves a sister Fern Matthews and her husband Blase of Vermont, three brothers and their wives, Ron and Debbie Perras of Windsor, Eugene and Spring Perras of Vermont and Mike and Lisa Perras also of Vermont as well as many nieces and nephews. She was predeceased by a sister Danielle Jackson. A memorial service and burial will be private at the convenience of the family. In lieu of flowers donations in Diane's memory may be made to Hartford HealthCare at Home Hospice 1290 Silas Deane Highway, Wethersfield, CT 06409. The Beecher & Bennett-Flatow Funeral Home, 48 Cook Ave., Meriden has been entrusted with the arrangements.