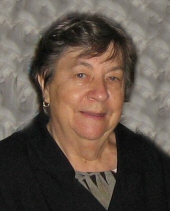 Dolores Evelyn Cascio, 85, lifelong resident of West Haven, passed away at Yale New Haven Hospital on February 29, 2016, after a short illness. Born in New Haven on January 12, 1931, to the late George & Florence Thomas Hyde. Dolores was widowed by Bernardino Cascio, her loving husband of 52 years. She will be remembered by her children and their spouses, Kimberly & Timothy Geiger of Deltona, FL and Mark & Susan Cascio of Guilford; grandchildren, Hannah & Paige Cascio; sister, Murial Knoll of West Haven; dear friend, Mary German; several nieces & nephews. She was pre-deceased by her siblings, George and Vincent Hyde, Mildred Pirrelli, and Eva Hyde Ford. Dolores was a skilled seamstress and contributed to pilot flight suits, as well as many clothes for her family. She was also a talented artist and painted many wooden decorations and furniture made by her husband. Dolores had been a member of the First & Wesley United Methodist Church in West Haven and was an active participant in its bell choir. Friends are invited to visit with her family on Thursday, March 3, 2016, from 5:00pm to 8:00pm at BEECHER & BENNETT-TAYLOR FUNERAL HOME, 410 Campbell Ave, West Haven. Her Funeral Service will be celebrated on Friday, March 4, 2016, at 10:00am at the funeral home followed by a burial in Oak Grove Cemetery. Contributions in Dolores' memory may be sent to Lewy Body Dementia Association, 912 Killian Hill Rd. S.W., Lilburn, GA 30047 or www.lbda.org.