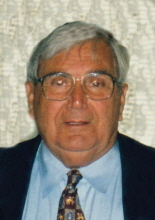 Dominic A. Iannone, age 85, of Hamden, passed away at his residence on October 8, 2014. Dominic was the widower of Anne N. Pickett Iannone. Born in New Haven on June 26, 1929 he was a son of the late Angelo & Philomena Tartaglione Iannone. Dominic lived many years in North Haven until moving to Hamden 10 years ago. He is survived by his 4 sons, Mark Iannone Det. NoHPD & his wife Beth Anne of North Haven, Martin Iannone of Warren, Matthew Iannone of Hamden and Michael Iannone & his wife Debra of North Haven; his grandchildren Michael, Alexis, Matthew, Zachary, Miranda, Dominic & Oscar Iannone; his brother Joseph Iannone & his wife Mercedes of Hollywood, FL; his brother in-law Walter O'Brien of North Haven; his nephews Daniel, Timothy & Kevin O'Brien; his nieces Kathy Iannone Hagood & Amy Iannone Tierney and his dear friend Marie Inzero of Hamden. Dominic was also predeceased by his sisters Mary Iannone, Rosella Iannone & Theresa O'Brien. He served in the US Army during the Korean Conflict. Dominic was an Insurance Agent working many years for agencies in the New Haven area. He was a member of the Lions Club, an avid golfer, Yankee & Giant fan and a dedicated family man, enjoying spending time with his grand kids. His funeral will be held on Tuesday, Oct. 14th, 9:15 AM from BEECHER & BENNETT FUNERAL HOME, 2300 Whitney Ave, Hamden, followed by his Mass of Christian Burial to be celebrated at 10:00 AM in St. Barnabas Church, North Haven. Entombment with Military Honors will take place in All Saints Mausoleum. Friends may also visit with his family at the funeral home on Monday from 3:00 to 7:00 PM. Contributions in his memory may be made to the Wounded Warriors Project, www.woundedwarriorproject.org , P.O. Box 758517, Topeka, KS 66675.