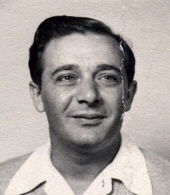 Dominic Lucibello, 94, a resident of the Lodge at Cold Springs in Rocky Hill, died Thursday, February 19, 2009. Husband of the late Filomena Rapuano Lucibello, he is survived by daughter Anne Cassarino and her husband Robert and son Vincent Lucibelloand his wife Elizabeth all of Glastonbury, a sister Rose Paffumi of Guilford and 5 grandchildren, Michael and Elaine Cassarino and Gregory, Brian and Gina Lucibello. In addition to his wife, Dominic was predeceased by a sister, Josephine Canestri and brothers Louis and Anthony Lucibello. A son of the late Vincent and Madeline Masselli Lucibello, he was born in New Haven on January 5, 1915. Dominic spent his life on the water, starting out as a fisherman on his father's boat, continuing with his service in the Merchant Marines and culminating with his life's work as a tugboat captain and harbor pilot, having been employed by Red Star Towing of New Haven. His other passion was ballroom dancing. Friends may visit with the family Saturday, February 21 from 9-10:30 am at BEECHER & BENNETT-TAYLOR, 410 CAMPBELL AVE., WEST HAVEN. A funeral service will follow at the funeral home at 10:30 am. Interment in St. Lawrence Cemetery, West Haven.