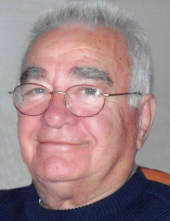 Dominic Paul Staffieri, age 89, also known as 'Stiff,' died on December 27, 2019 after a brief illness. He was the beloved husband of the late Marceline Staffieri. Born in Derby on July 11, 1930 to the late Dominic and Mary Macciocca Staffieri; Dominic was a graduate of Derby High School Class of 1947, where he played football for three years as the right guard. After graduation, Dom joined the National Guard and then went into the Army for two years. He was a Master Sergeant and served in mainly Italy and Germany. After an Honorable Discharge, he moved back to Derby. Dom married Marceline Tomassini November 7, 1953 in St. Mary's Church in Derby. They remained happily married for sixty-four years until Marceline's death in 2018. Dominic worked for Farrel Corporation in Derby and Ansonia for forty-three years. After retirement at age sixty-two, he became a bus driver for the Laidlaw Company for fifteen years until retirement at age eighty. Dom is survived by his children; Cheryl Loscalzo of North Haven and grandson Steven Loscalzo, Michael and wife Mary and grandson Gregory, all of Cheshire, and Dominic of California, his sister Helen Poliferno of Derby, and several nieces and nephews. Dominic was predeceased by his beloved siblings; Thomas Staffieri, Leonard Staffieri, and Lucy Niezelski. Dominic will be remembered as a loving husband, father and grandfather. He was a member of St. Rita Parish. Dom had a gift for mechanics and technology and love of building additions to houses. When he was young, he remodeled an old house from top to bottom. If his children needed help in their houses, he could do it all; electrical work, plumbing, gardening-you name it, he could do it. He saved everyone a ton of money! He especially loved fixing cars and watching football on T.V. For many years, he enjoyed doing things on his computer. In later years, Dom liked to have breakfast with his friends at the Valley Diner on Tuesday mornings. Dom loved his two grandsons and was known for helping with math homework and science projects. 'Poppy' gave them matchbox cars and took them to Lyman Orchards, malls, and Stew Leonard's in Norwalk. He was always available to drive them to work or school when necessary. He was also known for slipping them $20.00 to buy what they wanted. Dominic was a generous, hardworking family man and good friend. He gave good guidance and advice to his family and had a kind heart. Our Dad and Poppy will be greatly missed forever. His family would like to thank Montowese Health and Rehab Center for the excellent care Dom received. Friends are invited to visit with his family on Friday, January 3rd from 9:30 to 10:30 a.m. at BEECHER & BENNETT FUNERAL HOME, 2300 Whitney Ave, Hamden. A Mass of Christian Burial will be celebrated in Divine Mercy Parish-St. Rita's Church, 1620 Whitney Ave., Hamden at 11:00 a.m. followed by his burial with Military Honors in All Saints Cemetery.