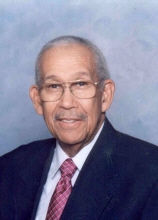 DONALD C. WILSON Bethany- Donald C. Wilson, 86, beloved husband of 63 years to Emily Stanley Wilson of Cheshire Rd. passed away February 10, 2006 in CT. Hospice after a brief illness. Mr. Wilson was born in New Haven December 11, 1919 a son of the late Charles H. and Jeannette Saunders Wilson, Sr. and had resided in Bethany since 1958. He was employed at the CT State Labor Department for many years, having started his career with the labor & wage division and later rose through the ranks to the position of Deputy Director before his retirement in 1986. He received a B.S. degree in accounting from Quinnipiac College and served in the US Army during WW II as a sergeant in North Africa and Europe. Mr. Wilson was affiliated with St Luke's Episcopal Church of New Haven and Christ Episcopal Church of Bethany, and also was very active with the Episcopal Diocese of Connecticut in which he held numerous offices. Mr. Wilson was a member of Prince Hall Masonic Widow's Son Lodge, in the tradition of his father and brothers. He also was a very active member of Chums/Hums, Inc. and the Antillian Friendly society. In addition to his wife, he is survived by his daughter Donna Wilson Johnson, and her husband Charles W. Johnson of Baltimore, MD, a granddaughter, The Reverand Tracy L. M. Johnson, Vicar of St. Andrews Episcopal Church of New Haven, a sister Louise Perry of Portland OR, two brothers Charles H. Wilson, Jr. of West Haven, and William R. Wilson of Los Angelas, CA. He is also survived by many nieces and nephews, and was predeceased by a brother Courtland Wilson. A Requiem Mass will be celebrated on Wednesday February 15, 2006, at 11 am in St. Luke's Episcopal Church, 111 Whalley Ave. New Haven.Family and friends are invited to visitation at church from 9:30 -10:30 am. Burial in Christ Episcopal Church Cemetery will be private. Arrangements in care of BEECHER & BENNETT 2300 Whitney Ave. Hamden. In lieu of flowers contributions in Mr. Wilson's memory may be sent to CT. Hospice 100 Double Beach Rd. Branford, CT 06405.