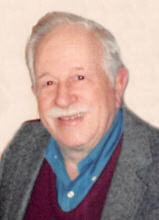 Donald F. Pegnataro Sr, age 95, of Woodbridge, passed away on September 1, 2016 at CT Hospice in Branford. Donald was predeceased by his wife of 55 years, Lucille Cianciolo Pegnataro. He is the father and father-in-law to Donald 'Deepy' Pegnataro and his wife Carol, Randall 'Randy' Pegnataro, Frank Pegnataro and his wife Kathy, Antonia 'Toni' Abildgaard, and Anthony Pegnataro and his wife Michelle; brother of Mary Tagliatela, Anthony Pegnataro Jr., and Joseph Pegnataro. Donald is also survived by 8 grandchildren and 2 great-grandchildren. He was born in New Haven, November 10, 1920, a son of the late Anthony Pegnataro Sr. and Josephine Farace Pegnataro. Donald was a proud US Army Veteran of WWII. He was part of the second wave onto Omaha Beach and participated in 5 major battles in the European Theatre. Upon his return home after the war he joined the family grocery business and rose to the position of President of Pegnataro's Super Food Stores. He was a model train enthusiast, an avid Jets fan and he loved his dogs. His kind and loving soul will be truly missed by everyone who knew him. Funeral from BEECHER & BENNETT FUNERAL HOME, 2300 Whitney Ave, Hamden at 9:00 AM on Wednesday, September 7, 2016 followed by his Mass of Christian Burial to be celebrated at 10:00 AM in Assumption Church, 81 Center Rd., Woodbridge. Friends may also visit with his family at the funeral home on Tuesday from 5:00 to 8:00 PM. Interment with full Military Honors will take place in St. Lawrence Cemetery. In lieu of flowers memorial contributions may be made to CT Hospice, 100 Double Beach Rd. Branford, CT 06405.