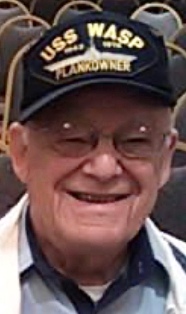 Donald G. Tozzo, 94, of Hamden, passed away on May 20, 2020. Born in New Haven on August 23, 1925 to the late John and Antonette Lavorgna Tozzo, Donald was a loving and dedicated husband, father, and grandfather. He will be greatly missed by his wife of almost 69 years, Eileen Courtney Tozzo; his children, Thomas Tozzo, Donald Tozzo, Nancy Tozzo, and Elaine (Tozzo) Perkins; his grandchildren, Donald & Cailey Tozzo, Shannon & Kristen Perkins, and Brianna Cichocki; and siblings, Shirly and John Tozzo. Predeceased by his infant son and his brother, Howard Tozzo. Donald proudly served his country in the Navy aboard the aircraft carrier U.S.S. Wasp C.V. 18 from 1943 to 1946, mainly in the pacific during WWII. Donald worked at Safety Car (Safety Electric Group, Corp.) for approximately 45 years, starting as a machinist and retiring as a plant superintendent. He liked to bowl and play golf, getting a hole in one at Sleeping Giant. As a young man he played baseball with a local Hamden team and liked to tell a story of being called into a game as a pinch hitter, where, to his surprise, he hit a homerun to win the game. After retirement, Donald did a lot of Wednesday and Friday night cooking at the Elks Lodge #2224. Despite his Italian heritage, his specialty was corned beef and cabbage. It was so successful, that it was repeated every September as a half-way to St. Patrick’s Day event. He was also a member of American Legion post #88. For Donald, Christmas and Easter were two of his favorite times to cook but we can’t forget squash flower season, he’ll take three bags. He always made gingerbread cookies for his grandchildren at Christmas and many grandchildren of Elks’ members benefitted as well. He enjoyed gardening and would put up tomatoes and string beans every year. Donald loved his family and that was returned in so many ways over the years. In the last 3 to 4 years as his health declined and assistance was needed, his family was there. His family would like to give a special shoutout to the caregivers at The Springs at Watermark East Hill in Southbury for their extraordinary care and compassion during this difficult time.
Donald’s private arrangements are in the care of BEECHER & BENNETT, 2300 Whitney Ave, Hamden. He will be laid to rest in All Saints Cemetery. In lieu of flowers, the family requests donations be made to the West Haven VA Visual Impairment Unit at www.connecticut.va.gov/giving/ .