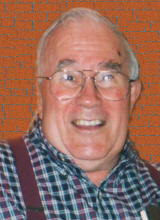 Donald Joseph Thomson, 91, a resident of West Haven for over 65 years, passed away peacefully on April 7, 2016. Don was born in New Haven on October 1, 1924 to the late Donald and Emma (Mursko) Thomson. Don leaves his wife of 65 years, Jane (Hull) Thomson, and his daughters Donna (Paul) Kohler, Carol (Dan) Bonyai, Patricia (Bruce) Bellmore, Barbara (John) Pellicano, Maureen (Sal) Cavallaro, and daughter-in-law, Joyce Thomson. Don also leaves 12 grandchildren. He is pre-deceased by his son, Donald Clifford Thomson, and his brother Edward (and wife Irma) Thomson. Don was a proud US Navy and WWII Veteran who served from 1943-46. During that time he was awarded the Purple Heart and five Campaign Ribbons. After serving his country, Don worked for Texaco Oil in New Haven for 33 years, and then for US Surgical in North Haven for ten. He was a devoted member of Our Lady of Victory Church in West Haven, and a member of the American Legion. Above all else, Don truly enjoyed spending time with his loving grandchildren. Calling hours will be held from 3-7pm on Monday, April 11, in the Beecher & Bennett-Taylor Funeral Home, 410 Campbell Ave., West Haven; and a Mass of Christian burial will be celebrated on Tuesday, April 12, at 11:00am at Our Lady of Victory Church. Burial will be at a later date.