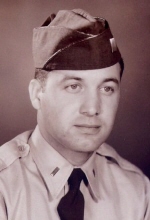 Donato (Dan) Barbiero of Hamden passed away June 11, 2016. Dan was born on March 27, 1927 in New Haven to Paul and Lillian Barbiero. Upon graduation from Hillhouse High School, he enlisted in the U.S. Army, proudly serving in WWII and Occupied Germany as a Staff Sergeant. He graduated from Fordham University, only to serve his country again in the Air Force Reserve, resigning his commission as a Captain. Dan worked as a salesman at GE. He was a Grand Knight of the Knights of Columbus, a member of the National Italian American Foundation, an avid golfer, a history buff, and a loyal and generous friend. He spent his retirement traveling to the remotest regions of seven continents and over 60 countries, and babysitting his beloved grandchildren. He is survived by his wife of 58 years, Grace Santagata Barbiero, three children: Daniel Barbiero (Rosemary Gwynn) of Silver Spring, MD, Dr. Richard Barbiero of Chicago, IL, Lynne O'Luanaigh (John) of Cheshire, and five grandchildren: Erin, Connor, Riley, and Declan O'Luanaigh and Nicholas Barbiero. He is also survived by his sister, Rosalie Forni, and several nieces and nephews. He was predeceased by his sister, Nancy Palmieri. Visitation will be held at Beecher & Bennett Funeral Home, 2300 Whitney Ave, Hamden on June 18th from 8-9 a.m., followed by his Mass of Christian Burial at 9.30 AM in Blessed Sacrament Church, 321 Circular Ave, Hamden. Burial with Military Honors will take place in All Saints Cemetery, North Haven. In lieu of flowers, memorial contributions may be made to The Connecticut Hospice, 100 Double Beach Rd, Branford, CT 06405.