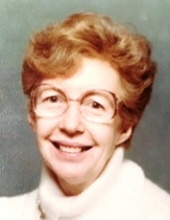 Doris (Meakin) Derr Buntin, age 96, of Southington, CT, passed peacefully to God on August 7, 2019. She was the daughter of the late Margaret (Meakin) Derr Crouse and Raymond Derr. Doris' father passed away when she was young, and she was raised by the late Homer Crouse. Born April 2, 1923, Doris was the eldest of her three brothers and one sister; Raymond S. Derr (deceased), Monroe H. Derr, Robert A. Crouse, and Peggy Ann Mongellow. She married Vernon Charles Buntin on April 9, 1949, and had two sons, Robert Russell and Mark Milo Buntin. After graduating from Philadelphia High School for Girls in 1940, at the age of 17, she attended Teachers College of CT. Her lifelong career as an English teacher would begin in 1944 at North Haven Junior High. While raising her two boys, Doris began to substitute teach at St. Matthew Lutheran School on Franklin Square in New Britain. Eventually accepting a full time position, she spent the next 25 years educating the children of St. Matthew. During her tenure there, Doris attended yearlong night classes until she achieved her Masters Degree in the English language. After retiring from St. Matthew, she would continue to teach English courses part time at nearby Southington High School for years. Her social involvement with the Order of Amaranth and being an active member of St. Paul's Episcopal Church since 1957 were both passions of Doris'. In addition to her children and surviving siblings, she is also survived by brother-in-law, Robert Mongellow, sister-in-law, Eleanor Crouse, daughters-in-law, Gloria Maria Buntin, and Brenda Rode Buntin; her beloved grandchildren, Melissa (Brian) Lucas, Cody, and Kyle Buntin; and great-grandchildren Dylan Mark Lucas and Jayden Buntin, along with many nieces and nephews. Friends are invited to join Doris' family at 10:00 AM on Saturday, August 17th at St. Paul's Episcopal Church, 145 Main Street, Southington, for a Memorial Service celebrating her life. There will be no calling hours. Her ashes will be interred with her late husband Vernon's in the St. Paul's Memorial Garden. Arrangements are in care of BEECHER & BENNETT FUNERAL HOME, 2300 Whitney Ave., Hamden. In lieu of flowers, please consider a donation to St. Paul's Memorial Garden Fund.