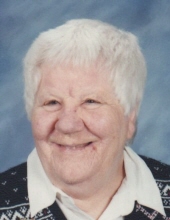 Dorothy Blackburn Umsteadt, 88, of Milford, formerly of West Haven and Killingworth, passed away Tuesday, May 6, 2014. She was the wife of the late Leonard J. Umsteadt, mother of Laura Sorbo, Wendy (Christopher) Valente, both of West Haven, and John (Geri) Umsteadt of Ocean City, MD, grandmother of Christian and Courtney Umsteadt, Dawn and Jessica Sorbo, Jill (Nicholas) Mitchell, Christine, Gina and Elizabeth Valente, great-grandmother of Nicholas, Brianna and Madison. She was predeceased by a great granddaughter, Brittany Umsteadt, her brothers, Douglas and Louis Blackburn and a sister, Elizabeth (Betty) Moffet. Dorothy was born in Westerly, RI, Sept. 26, 1925 a daughter of the late Louis Blackburn, Sr. and Gladys Barlow Blackburn. She was an LPN in the pediatric ward at Yale New Haven Hospital before retirement and was a longtime member of First Lutheran Church of West Haven. After her retirement, she spent much of her time volunteering and traveling with her grandchildren. The family would like to extend sincere thanks to the staff at Milford Healthcare. Friends may call Tuesday, May 13 from 9:30 to 11 a.m. at BEECHER & BENNETT-TAYLOR FUNERAL HOME, 410 Campbell Ave., West Haven. Memorial service will be at 11 a.m. Contributions in her memory may be made to the Alzheimer's Assoc., So. CT Chapter, 2911 Dixwell Ave., Hamden, CT 06518.