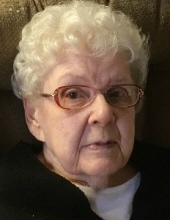 Dorothy Louise (Dickinson) Johnson, 93, passed away on Saturday, November 9, 2019 at Ledgecrest Health Center in Berlin, CT. She was the widow of William Douglas Johnson, and they were happily married for over thirty years before he died unexpectedly in 1983. She was born on December 2, 1925 in East Haven, CT to Richard and Helen (Sweet) Dickinson. She was predeceased by her sister, Shirley Crump. Dorothy grew up in Meriden and attended local schools, graduating from Meriden High School in 1943. During high school, she was a member of the Civil Defense League, and acted as a spotter at Mt. Higby Reservoir to help the World War II home front effort. After graduation, she worked at Cuno Manufacturing until her first child was born. Then, she dedicated herself to homemaking until 1968, when she was employed by Southern New England Telephone Company and retired from there after 25 years of service. Dorothy is survived by her son, Mark, and her daughter-in-law, Jane, of Hebron; her son, Wayne, and daughter-in-law, Rosanne, of Berlin. She is also survived by her grandchildren: Matthew ( and Juvelle) Johnson of Brighton, MA; Amanda Johnson of Niantic; Michael Johnson of Hebron; Sara (and Bob) Knowlton of Portland; Emma Johnson of Newington; and Cara Johnson of Cambridge, MA. She is also survived by her great grandchild, Jay Lariviere, of Niantic. She also leaves behind many nieces and nephews. The Johnson family would like to thank the staff of Ledgecrest Health Center for all of special care and attention they provided to Dot during the last six years of her life. A memorial service celebrating the life of Dorothy Johnson will be held on Thursday, November 14, 2019 at 11:00AM at St. Andrew's Episcopal Church, 20 Catlin St., Meriden. In lieu of flowers, donations can be made in Dorothy's name to the Connecticut Humane Society, 701 Russell Road, Newington, CT 06111.