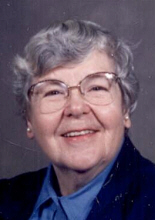 Dorothy Irene Backus, 90, of Wallingford formerly of Hamden, wife of the late Donald Backus, passed away peacefully on January 16, 2013 with her family by her side. She was born in Brooklyn, NY on April 3, 1922, daughter of the late John and Harriet Beasley Wiren. Upon graduating from the St. John's Hospital School of Nursing in NYC, Dorothy proudly joined the U.S. Army as a 1st Lieutenant during WWII and was stationed on Iwo Jima where she met her husband who was serving as a Navy Lieutenant in the Seabees. Dorothy and Donald shared 44 years or marriage and raising their cherished five children. Her long and rewarding nursing career ended when she retired from Whitney Manor. She was an active member of Spring Glen Congregational Church for many years. Dorothy will be remembered by her daughters, Nancy Grannis and her husband Lee of Bethany, Kathryn Janis and her husband, David of Wallingford and her sons, Carl Backus and his wife Michele of Wallingford and Thomas Backus and his wife Victoria of Bridgeport. She also leaves 13 grandchildren- Kate (Michael) Grannis Belton, Jennifer (Kevin Hurd) Grannis, 'Chip' Grannis, Amanda and Abigail Smith, Timothy and Kelly Backus, Benjamin, Anastasia, Mary Kate, Laura, John and Rose Backus. She was predeceased by her son Charles and her brother John Wiren and sister Thyra Griffin. Friends are invited to a Memorial Service on January 25th at 3:00 p.m. at the Masonic Chapel, 22 Masonic Ave, Wallingford. Burial will be Private. BEECHER & BENNETT, 2300 Whitney Ave, Hamden in care of arrangements. Contributions in memory of Dorothy may be sent to Masonic Charity Foundation P.O. Box 70, Wallingford, CT 06492.