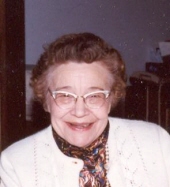 Dorothy L. Goodwin, age 91, of Woodbridge, passed away Feb. 6, 2009. Dorothy was the widow of William F. Goodwin, to whom she was married for over 40 years. She is survived by her niece Gayle Fazzalaro of Venice, FL, brother in-law Frederick Goodwin and niece Sue. In addition to her husband, she was predeceased by her sister Mildred McIntyre and niece Carol. Dorothy was born in New Haven on January 15, 1918, a daughter of Julius and Lillian Potter Weisbauer. She was raised in New Haven and was a graduate of Hillhouse High School. Mrs. Goodwin and her husband resided in Hamden, moving to Woodbridge in 1966. She received her teaching certificate in elementary education from New Haven Normal School in 1936 and went on to pursue a BS and MS in education in the mid 1950s from New Haven State Teachers College. She began her teaching career in Fairfield Public Schools and transferred to the New Haven School System where she taught at Ivy St., Scranton, and Barnard Schools. She also worked as an adjunct professor, teaching elementary education students enrolled at Southern Connecticut State College. She retired in 1968. Mrs. Goodwin was a member of the Woodbridge Garden Club for several years. She was a communicant of Church of the Redeemer. She was a very talented artisan working in ceramics, copper and oils. Her passion was collecting antiques, especially dolls. She spent many years creating doll reproductions by molding the bodies and dressing them in beautiful handmade period costumes. Services and Burial will be private. Arrangements are in care of BEECHER & BENNETT, 2300 Whitney Ave. Hamden. In lieu of flowers, contributions may be made to the American Diabetes Association, 306 Industrial Park Rd., Suite 105, Middletown, Ct 06457.