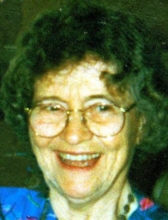 On June 22nd, Dottie died peacefully in her sleep after a lengthy decline. She was 96. Dottie grew up in Hartford in a lively family of eight children during the Depression. In spite of economic hardships she attended Wellesley College on scholarship, majoring in music. She married Norman Greist (Ned) in 1937. They designed and built their 'unusual' home overlooking the Sleeping Giant in North Haven, where the couple raised their five children. As a young adult Dottie proclaimed, 'I don't want to sit home like my mother; I want to be involved in this exciting world!' Her life's work reflected this ambition. Her early activities included aiding the PTA, Girl Scouts and a local blood bank. She took up the clarinet, a huge part of her life. She initially took lessons and later taught, arranged music and played in two different orchestras. She was a great lover of nature, especially botany. She volunteered at Recording for the Blind and The Clifford Beers Clinic, a facility for emotionally disturbed children in New Haven. Working on the Clifford Beers board became a focal point for her. Later in life, Dottie became interested in photography and acquired an insatiable desire for world travel (especially after Ned died in 1989). Dottie will be remembered for her passionate involvement with life, excelling at everything she set her mind to. Her daughter Polly lovingly cared for her throughout her later years. She leaves her five children: daughters Polly Lanius of North Haven and Peggy Grant of Colorado, sons Allan and David also of Colorado, and Walter of North Haven. She leaves her children's spouses, nine grandchildren, and ten great-grandchildren. She was predeceased by three grandchildren. A memorial service will be held at the Spring Glen Church, 1825 Whitney Ave., Hamden at 3:00 p.m. on Friday, July 9, 2010. In lieu of flowers, memorial contributions may be made in Dottie's name to the Clifford W. Beers Guidance Clinic Fund at The Community Foundation, 70 Audubon Street, New Haven, CT 06510. Arrangements in care of BEECHER & BENNETT, 2300 Whitney Ave., Hamden.