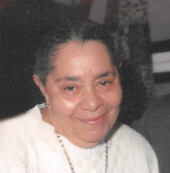 Dothia Maria Greene, 81, of Eastern St., New Haven, wife of the late Ernest E. Greene passed away April 27, 2015 in the St. Raphael Campus of Yale New Haven Hospital after a brief illness. She is survived by her grandchildren Troy Fernandez, of New Haven and Tequell Fernandez of New Haven, 8 great-grandchildren, and 4 great-great-grandchildren. Sister of Agnes White of Cheshire, Joseph (Agnes) Von Britton of Northford, and Bernice Garcia of Hamden. Dothia is also survived by many nieces, nephews and cousins. She was predeceased by her sons, Anthony Fernandez, Michael and Floyd Jones, and a sister Ingerbord Von Britton. Dothia was born in St. Croix, US Virgin Islands August 10, 1933 a daughter of the late Joseph and Rachael Sargent Von Britton and had resided in New Haven since 1948. She was employed at Yale University Food Services for 35 years before retiring in 1997. She was a member of the Food Service Workers Local Union# 35, and was a union steward, department steward and recording secretary. Dothia was an active member of Trinity Church on the Green, New Haven, serving on the Altar Guild, was an usher and the conference call for the elderly. Friends may visit with her family at BEECHER & BENNETT, 2300 WHITNEY AVE., HAMDEN on Friday May 1, 2015 from 6-8 p.m. Funeral Service will be held Saturday morning at Trinity Church on the Green, New Haven at 10 a.m. Interment in All Saints Cemetery. Contributions in her memory may be sent to Trinity Church, 950 Chapel St., New Haven, CT 06510.