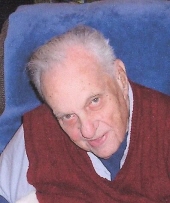 Meriden- Dr. George H. Dickinson, M.D., 87, husband of the late Janet (Pilling) Dickinson passed away on Sunday, May 18, 2008 at Meriden Center. He was born April 28, 1921 in Meriden, a son of the late George H. Dickinson, DMD and Harriett Lewis Dickinson. He attended local schools, graduating from Meriden High School in 1939 and Trinity College in Hartford in December, 1942. He then taught physics at Meriden High School until April, 1943. George then headed to the University of Vermont, College of Medicine graduating in 1946. He proudly served his country in the US. Army during WWII. He returned to Hartford to do post graduate training at Hartford Hospital where he met Janet Esther Pilling, RN, whom he married in 1948. He then returned to Meriden where he practiced medicine as a general practitioner for 48 years, retiring for health reasons in 1996. He was an avid tennis player, well known at Hubbard Park and a frequent finalist in the local tennis tournaments. He was a lifetime member of USTA, a member of the Meriden Hall of Fame, the Elks Club, and was the doctor for the Platt High School Football team in the late 1960's and early 1970's. He was Chief of Staff at Veterans WWII Memorial Hospital, where he worked closely with his uncle, David Smith, MD and cousin Edward Smith, MD He was a member of the Hospital's Infection Control group, taught at the Meriden-Wallingford Hospital School of Nursing, was active at Meriden Hospital, Meriden-Wallingford Hospital, Veteran's WWII Memorial Hospital and Bradley Memorial Hospital in Southington. In retirement years he focused on his tomato garden and loved to tell the stories of his life to anyone who would listen. He was dedicated to his practice and will be missed by all. Dr. Dickinson is survived by his daughter, Janet B. Dickinson, MD of Meriden, cousins Ken Cowing and his family of Meriden, David Smith of MA, Aleta Gudelski of Durham, and Diane Doolittle, as well as various other cousins. A funeral service will be held on Saturday, May 24, 2008 at 1:00pm at Center Congregational Church, 474 Broad St., Meriden. Burial will follow in Walnut Grove Cemetery. Relatives and friends may call at the Beecher & Bennett-Flatow Funeral Home, 48 Cook Ave., Meriden on Friday, May 23 from 4-8pm. In lieu of flowers, please make a donation in Dr. Dickinson's memory to your favorite charity.