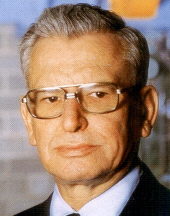 Dr Michael J. Pryor, 87, passed away peacefully on Saturday, Oct 6, 2012 at Emeritus Senior Living in Woodbridge. Michael was born in Leek, England on March 31, 1925. He was predeceased by his wife Pax Pryor and is survived by his daughter and son-in-law, Maureen & Bob Preuss of Cheshire, Valerie Johnson of Port Saint Lucie, Florida, his son Laurence Pryor of Marlborough, CT, 4 grand children (Suzanne, Keith, Marc, Shane) and 3 great grand children. Dr. Pryor received his B.A. in Metallurgy (1946), M.A. and Ph. D. in metallic corrosion (1949), from Trinity College, Cambridge University in England. Mike brought his family to the United States in 1953 when he joined Kaiser Aluminum and Chemical Corporation's Metallurgical Research in Spokane, Washington as a research engineer. In 1957, he joined Olin Corporation's Metals Research Laboratories in New Haven, becoming the Director in 1971. In 1980, he became Vice President of Metals Research. During his career, Dr. Pryor published 54 papers in the area of corrosion, oxidation and physical metallurgy. He received 126 U. S. patents in the field of alloy development and metallurgy and was president of the Electrochemical Society in 1976-1977. Besides his family, Mike loved growing Dahlias and the New York Giants. In the 'Dahlia World', Mike was past president of The Connecticut Dahlia Society four times and twice president of the North Atlantic Dahlia Conference (NADC). His most cherished achievement in the dahlia world was to receive the ADS Gold Medal achievement award at the ADS National Show hosted by the Mid Island Dahlia Society (MIDS). Mike was ahead of the curve in applying his scientific principles to the growing of dahlias and subsequently wrote several articles on the growing and fertilization of Dahlias. 'Iron Mike' was best known for his giant size competitive entries of 'Walter Hardisty' for many years. The family wishes to thank the exceptional caregivers and staff at Emeritus Senior Living in Woodbridge, Willcare visiting nurses and Vitas home hospice services for the loving care provided to Dr. Mike. Dr. Mike (Dad) will be deeply missed by those of us who knew him and loved him. BEECHER & BENNETT FUNERAL HOME, Hamden is in charge of arrangements. A Private Memorial Service will be held by the family at a later date. Memorial contributions may be sent to Willcare, 414 Chapel Street, New Haven, CT 06511.