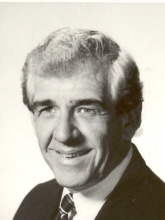 Dr. Palmer F. McWeeney, age 74, of Hamden , passed away May 20, 2010 . Palmer was the beloved husband for 50 years of Patricia Bodie McWeeney. Born in New Haven , April 12, 1936 , he was the son of the late Michael and Mary McWeeney. Palmer is survived by his two children, Scott McWeeney and Alison McWeeney and her husband Paul Johnson; grandchildren, Rachel and Brian Johnson, and Jessica and Deanna McWeeney. Palmer also leaves a sister, Maureen Platt, and sister-in-law, Maureen Bousquet. Palmer received his undergraduate degree from Central CT University and his Ed.D. from NOVA University . He began his career in public education as an Industrial Arts teacher and later held many administrative positions including Assistant Principal of Lyman Hall High School in Wallingford , Principal Terriville High School and Assistant Superintendent for Regional School District 12. After retiring from 30 years in public education he worked for 11 years and retired from the West Haven VA Hospital as a Rehabilitation Supervisor of the blind unit. His memberships included the Hamden Board of Education and the Hamden Civitan Club as a member and past President. Friends may visit with Palmer's family for a celebration of his life at BEECHER & BENNETT FUNERAL HOME, 2300 Whitney Ave. , Hamden on Sunday, May 23, 2010 from 3:00 to 6:00 PM and may also attend a Mass of Christian Burial at 10:00 AM on Monday at St. Rita Church, 1620 Whitney Ave. , Hamden . Entombment will follow in All Saints Mausoleum, North Haven. Contributions in his memory may be made to the Smile Train, P.O. Box 96231 , Washington , DC 20090-6231 or a charity of one's choice.