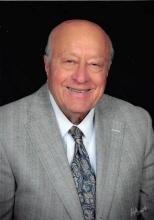 Dr. Peter Demir, age 84, beloved husband of Elizabeth Armstrong Demir, passed away at his home in Woodbridge on September 3, 2015 after a courageous battle with cancer. He was born on January 1, 1931 in Korce, Albania, a son of the late Qazim and Myrset Terolli Demir. He immigrated to America as a five-year-old in 1936 and just three months ago, despite his stealthy illness, he enjoyed one of his greatest lifetime experiences, a return to the land of his birth. Cheering him on were his three children; Jennifer O'Connor, Kristen (Mark) Wilson and Alex (Tess) Demir. He is survived also by four grandchildren; Madeleine Wilson, George Wilson, Roman Demir, and Nina Demir and many cousins and mentees who benefited from his encouragement over the years. His brother, Ramsey Demir, and a granddaughter, Sara O'Connor predeceased him. He loved his family dearly and his last words were, 'Stay together'. He was a graduate of Crosby High School in Waterbury, Connecticut, where he grew to love the game of basketball. As a guard known for his play-making ability, he earned spots on the all-city and all-Naugatuck Valley basketball teams. He received a BA in Zoology from the University of Pennsylvania where he also played varsity basketball and was a member of the AFROTC and Sigma Chi Fraternity. After serving in the U.S. Air Force Reserves, he went on to earn his medical degree at New York Medical College. He completed his residency in urologic surgery at Yale School of Medicine and proudly established his own private practice of urology in New Haven in 1964, retiring forty-eight and a half years later in January 2013. First and foremost, Dr. Demir was dedicated to his patients and loved working and thinking about how best to serve them. He loved jazz, dancing and gardening and his passion for playing, watching and talking sports was boundless. He was an armchair coach and avid fan of the New York Giants, Yankees, and Knicks. He loved reading history and current events and, if he hadn't chosen medicine, he would have made an outstanding history teacher and basketball coach. His indomitable spirit will live on in all who knew him. The family would like to thank all the friends and caregivers who helped us through the last days of his life and beyond. A service and reception celebrating his life will commence at 5:00 pm on Friday, October 2 at the New Haven Lawn Club, 193 Whitney Avenue, New Haven. Gifts in memory of Dr. Demir can be made to the Department of Urology, Yale School of Medicine, P.O. Box 208058, New Haven, CT 06520 or to the Sara Elizabeth O'Connor Fund at the Community Foundation, 70 Audubon St., New Haven, CT 06510