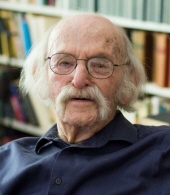 Dr. Stanley A. Leavy died peacefully of old age on October 31, 2016 in Newton, Massachusetts. He had moved to Newton a year earlier to be close to two of his children and before that had resided at the Whitney Center in Hamden for 20 years. Born in New York on August 11, 1915; he was married for 67 years to Margaret H. Russell of New Haven, who predeceased him by 9 years. He was the son of Nathan and Josephine (Breakstone) Leavy and was educated in the New York and Lynbrook, Long Island public schools. He graduated from Yale College in 1935, attended the graduate school of the University of Chicago (1935-36), and was awarded the M.D. degree by the University of Rochester in 1940. After internships in Syracuse and Rochester and a period of general medical practice in rural Tennessee, he worked with the Society of Friends in the Civilian Public Service as a conscientious objector during WWII, employed as a physician in the Connecticut and Fairfield State Hospitals. Following discharge he completed resident training in psychiatry at Yale and was graduated from the New York Psychoanalytic Institute in 1954. Dr. Leavy was engaged in the private practice of psychiatry and psychoanalysis in New Haven from 1949 until 1995. He was a member of the staff of the Yale-New Haven Medical Center and of the Yale School of Medicine, reaching the rank of Clinical Professor. He also worked as a psychiatrist in the Yale Department of University Health (1960-73) and was a lecturer in Saybrook College. He was President of the Western New England Institute for Psychoanalysis (1968-70) and taught at the Institute for most of his career, engaged in the training of younger analysts. Dr. Leavy was an early proponent of the admission of non-medical applicants, and later of homosexual applicants, for psychoanalytic training. He was a member of the editorial board of the Psychoanalytic Quarterly (1963-86) and published many articles and reviews on psychoanalytic theory and its application to the study of religion and literature. He made the first English translation of writings of Lou Andreas-Salome, an early follower of Sigmund Freud. One, her 'Freud Journal,' was published in 1964. His book 'The Psychoanalytic Dialogue' appeared in 1980, and 'In the Image of God: A Psychoanalyst's View' in 1988. He also published a collection of some of his articles in 2005, with the title of 'Questioning Authority,' and, on a lighter note, gained a largely new and appreciative audience with the publication, on the occasion of his 100th birthday, of 'Ranch Rambles,' a collection of informal musings that had originally appeared in the Whitney Center residents' magazine. Brought up in the Jewish religion, Dr. Leavy became a Christian in his youth, initially in the Society of Friends. For most of his adult life he was a parishioner of Christ Episcopal Church in New Haven, where he served periods as vestryman and lector, while gratefully keeping his Jewish attachments. His other affiliations included the Democratic Party, the Jewish Voice for Peace, the Connecticut Psychiatric Society, the Connecticut Medical Society, the American Psychiatric Association, and the American Psychoanalytic Association. He also belonged to the Connecticut Academy of Arts and Sciences and to the Elizabethan Club at Yale and was an Associate Fellow of Saybrook College. He was a student of ancient and modern languages and literature, a pianist, rose-gardener, walker, and for many years, a figure-skater. He is survived by his daughters Elizabeth Stroman of Sausalito, CA (husband Robert), and Jane Leavy of Newton, MA (husband Frederick Sperounis), six grandchildren and ten great-grandchildren. His son, Jonathan Leavy of Newton, MA (wife Virginia Read Leavy), died in June 2016. Memorial gifts may be directed to the American Civil Liberties Union, to the NAACP Legal Defense Fund, or to Christ Church (Episcopal) A funeral mass will be celebrated on Saturday, December 3, at 1:00 p.m. at Christ Church, 84 Broadway, New Haven, followed by interment in Grove Street Cemetery and a reception at the Whitney Center, 200 Leeder Hill Drive, in Hamden.