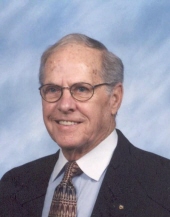 In Wallingford, July 23, 2007, E. Bernard Roop ("Bernie"), 89. Born August 17, 1917 in Detroit, MI, he was the son of Harry A. and Ruth Benson Roop. Bernie grew up in New Haven and attended Hillhouse High School and the University of New Haven. He retired as the New England representative for Chase Industries, Inc. out of Cincinnatti, OH after being with the Pratt & Whitney aircraft division of United Technologies Production Engineering Department for many years. Bernie was a 62 year member of Trumbull Lodge #22. He was a member of the Ancient Accepted Scottish Rite Valley of Bridgeport, the Pyramid Shriners, and a member of Pyramid Drum and Bugle Corps, where he served as officer and trustee. He was on the advisory board for the Salvation Army. Other memberships included Garibaldi Masonic Club of Connecticut, a past president of the New Haven Lions Club, having received the Melvin Jones and Knight of the Blind awards, the highest award given by Lions International. He was also the past president and director of the Inter-Service Clubs Committee, Inc. that owns and operates Camp Cedarcrest in Orange, and was a former member of the Board of Deacons at the Mt. Carmel Congregational Church. In 1949, Bernie married the former Sylvia Grace Franco of Fair Haven. They settled in North Haven where they resided for 56 years, before moving to Masonicare in Wallingford, CT. In addition to his wife, Bernie is survived by his daughter, Lynda MacArthur and her husband Gordon from Castine, ME, his granddaughter Susan Walsh and husband Sean from Blue Hill, ME, and grandson Gordon "Mac" MacArthur and wife Kathy of Castine, ME. He is also survived by four great-grandchildren, Bess, Will, Sydney and Grady, all of Maine, a nephew Richard Morris and niece Barbara Stephens, both of Kentucky. He was predeceased by his parents and sister Hazel Edwards of Hemet, CA. Funeral Service Friday, July 27, 2007 at 11 a.m. at Mt. Carmel Congregational Church, 3284 Whitney Ave., Hamden. Friends may call prior to the service from 9:30 - 10:30 a.m. Masonic Service at 10 a.m. at BEECHER & BENNETT, 2300 Whitney Ave., Hamden. In lieu of flowers, donations may be made to the Shriner's Orthopedic Hospital, 516 Carew St., Springfield, MA 01104.