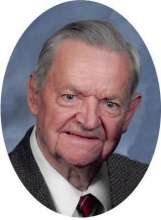 E. Robert Carlson, 86, husband of Joanne Madison Carlson, passed away at his home in West Haven on Dec. 15, 2014. He was the father of Debra & David Bond of Cheshire, Beth & Edward Tuohy of Fairfield, and Cheryl & Vernon Guetens of Cheshire, brother of Lorraine Standish of West Haven and the late Merrilyn Dahlgard. Also survived by six grandchildren. Bob was born in New Haven, April 15, 1928, the son of the late Edward O. & Edith Johnson Carlson. He was a WW II US Army Veteran. He graduated from Upsala University with a BA and the University of Bridgeport with his Master's in Education. Due to his love of the English language, Bob taught for 27 years high school English for the town of Shelton. Bob's second passion was for the West Haven Fire Department, which gave him his nicknames Swede and UPSY. He was a volunteer for the Hook and Ladder Co. of West Haven for over 55 years and Clerk of the Board of Fire Commissioners for 35 years. Bob was a 58 year member of Annawan Lodge #115 A.F.& A.M. of West Haven, member of the VFW, American Legion, D.A.V., was a life member of the Prospect Fish & Game Club, and a longtime member of the First Congregational Church of West Haven. Memorial Service Friday, Dec. 19 at 10 a.m. in the First Congregational Church, West Haven. Interment will be private. Contributions in his memory may be made to the First Congregational Church, Book of Remembrance, 1 Church St., West Haven 06516. Arrangements under the direction of BEECHER & BENNETT-TAYLOR FUNERAL HOME, 410 Campbell Ave., West Haven, CT