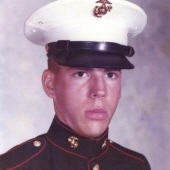 Earl William Cote, 61, of Meriden, passed away unexpectedly at MidState Medical Center on July 9, 2017. He was born in Meriden on March 27, 1956 to the late William and Pearlie Donnelly Cote. Earl was a graduate of Platt High School class of ‘74. He proudly served his country as a Marine and was a member of the Presidents Marine Band during active duty. For the last 14 years he was a well-loved music teacher and band director at Lincoln Middle School. Earl also conducted the Honors Band and the Augusta Curtis Concert Band. He was a big supporter of the Meriden Humane Society and was an avid cat lover. Earl will be remembered by his wife, Margery Cote; his sisters, Susan Cote of Meriden and Dianne Cote of New London; and several nieces and nephews. Friends are invited to visit with his family on Thursday, July 13th from 4:00 to 7:00p.m. at BEECHER & BENNETT-FLATOW FUNERAL HOME, 48 Cook Ave., Meriden, followed by a Memorial Service at 7:00p.m. Burial will be private. Contributions in Earl’s memory may be sent to Augusta Curtis Concert Band, P.O. Box 4173, Meriden, CT 06450.