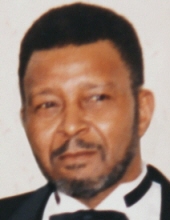 Eddie Lewis Pennyman 'Bubba' died peacefully at MidState Medical Center in Meriden on May 13, 2018 at the age of 85. Eddie is survived by his sister, Charlene Eleby of Meriden; his children, Eddie JR & Flora Pennyman of GA, Faye Taylor, Robert Pennyman & Luether Pennyman of OH, Mary Ann Caldwell, Eddie Jr (Zenia) Pennyman, Victor Pennyman, Lisa Pennyman-Shider, Melinda (Ralph) Gonzalez, Matthew Pennyman, Bridgette Pennyman, Richard Pennyman all of Meriden and a host of grand & great grandchildren. He is preceded in death by his sons, Pete & Dean Pennyman and his daughter, Celestine Pennyman. Eddie was born on March 3, 1933 in Thomaston, GA to the late Preach & Ethel Jordan Pennyman. After moving from Thomaston, Eddie settled in Meriden and began working for International Silver and the Miller Company before starting his own business as a General Contractor that he sustained until his retirement. He loved fixing things and there was no job to big or complicated. In his spare time Eddie loved to restore cars and go fishing. In his later years he loved reminiscing sharing stories of his past including his time as a lead timber-man and making moonshine with his dad for Little Richard's father to whom was his cousin. He also loved spending time with his grandchildren to whom many of them also called him dad. Friends are invited to visit with his family on Saturday, May 19th from 2:00 to 4:00 p.m. at BEECHER & BENNETT-FLATOW FUNERAL HOME, 48 Cook Ave, Meriden, followed by a Memorial Service at 4:00 p.m. in the funeral home. Burial will be private. To leave a condolence for the family please see obituary at www.beecherandbennett.com