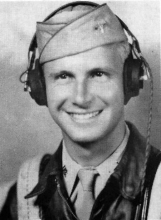 Edgar Beale, 91, of Hamden passed away on Friday, April 1, 2011. Husband of the late Juanita Houser Beale, he is survived by sons Edward K. and his wife Martha Beale of Tolland, Roger C. and his wife Irene Beale of North Haven, Duane L. and his wife Janet Beale of Cheshire, Alan G. and his wife Anne Beale of Los Gatos, CA and Greg W. Beale of South Lake Tahoe, CA. Edgar is also survived by 11 grandchildren, 6 great-grandchildren and 2 brothers, Arthur of Westminister, CA and Robert of Stratford. In addition to his wife, he was predeceased by a brother Alfred Beale. A son of the late Alfred and Emma Sumner Beale, Edgar was born in Pawtucket, Rhode Island on November 23, 1919. He served in the the US Army Air Corps. during WW II as a bombardier in B-17 and B-29 aircraft, later serving in the Air Force Reserve and the Korean War and retiring with a rank of Captain. Edgar received an Associates Degree from CT College of Commerce and was a lifelong Banker. He retired from First Bank as Sr. Vice President in 1979 and later from CT Savings Bank in 1985. He was a former President of the New Haven Jr. Chamber of Commerce, a member of the Boy Scouts of America, the Hamden Fathers Assoc., Hamden Elks Lodge, #2224, American Legion, Post # 88. Edgar was an avid golfer and a former member of the Wallingford CC, Laurel View CC and Pilgrims Harbor CC. He enjoyed dancing and was a member of many dance clubs, square, round and ballroom dancing. Friends may visit with the family Monday April 4, 2011 from 5 to 8 pm at BEECHER & BENNETT, 2300 Whitney Ave., Hamden. Funeral Service will be Tuesday, April 5, at 10 am in the funeral home. Interment with military honors will follow in Beaverdale Memorial Park. Memorial Contributions in Edgar's name can be made to the Alzheimer's Association, South Central CT Chapter, 2911Dixwell Ave., Ste. 104, Hamden, CT 06518 or the Lupus Foundation of CT, 45 South Main St., West Hartford, CT 06107. To send a condolence, please see obituary @ www.beecherandbennett.com.