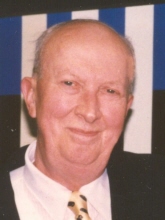 Edgar F. Jensen, 89, husband of the late Gladys Pogonelski Jensen of 339 Eastern St., New Haven passed away January 23, 2009 after a brief illness. He was born in New Haven March 13, 1919, a son of the late Jorgen N. and Anna Wilhelmsen Jensen, and was a life long New Haven resident. He served in the US Army Medical Corps. during WW II in the Pacific Theater. Mr. Jensen was employed as machinist at Winchester Repeating Arms. Co., retiring in 1986 after many years. He is survived by three sisters and their husbands, Ethel and Norman Eddy of Estero, FL., Alice and David Montgomery of Durham and Peggy and Martin Regan of North Haven. Funeral service will be held at BEECHER & BENNETT, 2300 WHITNEY AVE., HAMDEN, Thursday morning January 29, at 11am. Friends may call from 10-11am. Interment in Hamden Plains Cemetery. Memorial contributions may be sent to the charity of one's choice.