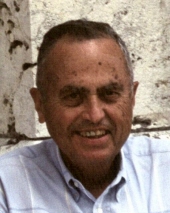 Edgar Lyman Russell, 80, of North Haven, founder of Russell Partition Company, quietly passed away Monday, October 13, 2008, after a long illness. At his side were his wife Marion Morriss Russell, and his son William Lyman Russell. He also leaves behind his sister Ruth Virginia Reel of Annandale, VA, and many nieces and nephews. Edgar and Marion recently celebrated their 50th wedding anniversary. Edgar was born in New Haven on June 10, 1928 to Louise and Lyman Russell, and spent his childhood at their home on Thornton Street, Hamden. He met Marion while a member of the New Haven ski club in 1957. Edgar attended Spring Glen School, and Hamden High School. He graduated from the Engineering School at the University of Connecticut in 1950, and served in the United States Army during the Korean War. After working for General Electric in Binghamton, NY, and Allis-Chalmers in Milwaukee, WI, he returned to Hamden, and founded the Russell Partition Company, Inc., of North Haven, in 1970. Edgar loved the outdoors, exploring Sleeping Giant, hiking the Adirondacks and the Green Mountains, skiing Vermont, and sailing Long Island Sound. He loved long walks, cats and dogs, trips into New York to the opera and ballet, and quiet evenings at home next to the fire. A memorial service will be held at 11.00 A.M. on Friday, October 24th at St. John's Episcopal Church, 3 Trumbull Place, North Haven CT. In lieu of flowers, donations may be made to the Edgar L. Russell Scholarship Fund, payable to University of Connecticut Foundation, 2390 Alumni Drive, Unit 3206, Storrs, CT, 06269. Arrangements in care of BEECHER & BENNETT, 2300 WHITNEY AVE., HAMDEN .