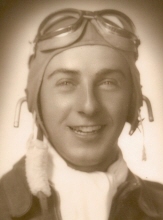 Edmund David Gerosa, 88, of Hamden, passed away on March 29, 2012. Born on February 4, 1924 at 3025 Dixwell Ave., Hamden to the late Angelo August and Maria Ronchetti Gerosa. He and his mother went to the families' villa in Italy when he was 6 years old. Not long after their return, his mother passed away and he was raised by his father and three older brothers. He attended Hamden High School and was the first freshman to ever play hockey and the team won the State Championship that year in 1939. He went on to become Captain of the Hamden Hockey Team. Edmund received a hockey scholarship to the University of Illinois in 1942 before entering the Army Air Corp. He served his country as a pilot from 1942-1945. He was Honorably Discharged as a Second Lieutenant. For the next seventeen years he was in the reserves reaching the status of Major. He also received many honors and awards for his dedication and accomplishments to the Air Force, especially during the years as an Air Force Academy Liaison. He was a school teacher in Hamden for 11 years before becoming a guidance counselor at Hamden High School until his retirement in 1982. Edmund was a great businessman, having built the European Health Spa where his residence and birth place once stood. Family enjoyed summers with Edmund spent at their cottage in Branford. He enjoyed his years as a chinchilla breeder, was a member of the American Legion Post #88, and loved to dance. Edmund leaves his wife, Joan Young-Gerosa; daughter Lisa Beth Gerosa and son, Richard David Gerosa both of Branford; two grandchildren, Nicole Marie Gerosa and George Edmund Gerosa of Branford and many nieces and nephews. Predeceased by his first wife, Elizabeth Gargaly Gerosa;a son, Steven Edmund Gerosa, brothers, Raymond, William, and Edward Gerosa. Edmund will be remembered by most for his generosity, compassion and most of all, his guidance. BEECHER & BENNETT FUNERAL HOME, 2300 Whitney Ave., Hamden in care of PRIVATE arrangements. Memorial contributions in Edmund's memory may be sent to the CT Hospice 100 Double Beach Rd., Branford, CT 06405.