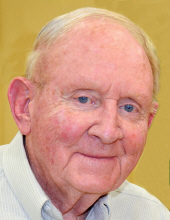 Edmund Reed Rogers Jr. passed away on Sunday, April 19, 2020 at the Veterans Administration Medical Center in West Haven, CT. He was the devoted husband of 66 years to Patricia Tinlin Rogers, and was the proud father of four children and grandfather of seven grandchildren. Edmund was born on May 20, 1931 in Holyoke, MA, the only child of Edmund Reed and Edna Astley Rogers. He grew up in West Haven where he attended Noble School, Washington School, and West Haven High School. He was a member of the West Haven Congregational Church, where he met the love of his life, Patricia, when they performed together in a play. Ed had an early interest in film and photography, creating movies with his cousins, acting as the West Haven High School photographer, and operating a commercial photography studio from his home. After high school graduation, Ed briefly attended the Progressive School of Photography in New Haven before entering the Navy. A proud veteran of the Korean War, Ed served as an electronic technology specialist aboard the aircraft carrier USS Saipan. Stateside, he worked as an assistant Naval ROTC instructor at Princeton University. It was during his stint in the Navy that Ed developed a passion for technology and airplanes, and honed his skills in electronics. In 1961, Ed founded his business, Ed Rogers Radio and TV, Sales and Service, which was a fixture in West Haven center for over 45 years. His fields of expertise evolved from tube televisions and radios to video recorders and computers. He was an avid learner and enjoyed keeping abreast of the latest technological advancements, regularly attending professional development courses and programs. He took pleasure in offering his customers personal attention and quality service. His interest in technology was matched by his love of aviation. Ed was excited to earn his private pilot license in 1968. He purchased a small plane and delighted in sharing his enthusiasm for flying with family and friends. He piloted many family trips to Cape Cod and Canada, as well as a special vacation to Walt Disney World in its inaugural year, 1971. It was during one of those trips that Ed recognized a need for back-up digital technology in his plane. He established a small company and invented a distance measuring instrument which he marketed to other small plane pilots. In later years, Ed and Pat enjoyed many day flights along the East Coast, with their mini-bikes loaded into the plane, ready to explore the countryside. Ed would seize any opportunity to take flight. He would regularly take plane rides to nearby airports, with a family member, a friend or simply solo, in search of the biggest and best in-house pancake breakfast. Ed and Pat, who married in 1953, spent most of their lives in Orange, CT. There they raised their four children and enjoyed many activities in the company of family and friends. As a longtime member of the Paugusset Club, Ed could often be found on the tennis courts, and he and Pat were members of several bridge groups and gourmet cooking clubs. Ed also enjoyed time at the family summer homes on Lake Hayward in East Haddam and on the Branford shore where he spent his days sailing, exploring in his motor boat, and fishing for relaxation. In recent years, Ed and Pat became avid bicyclists. They meticulously planned tours of New England bike routes, with Ed being particularly fond of excursions to Cape Cod and the Berkshires. During hockey season, Ed could be found glued to the TV, cheering on his favorite team, the New York Rangers. Most recently, he lived at Elim Park in Cheshire where he enjoyed tending to his garden and attending concerts with Pat. Among Ed's endearing qualities were his affable personality and his clever sense of humor, which he retained throughout his life. He was fun-loving, easy to talk to, and he had a knack for punctuating any moment with a witty comment. Ed will be remembered by his family as a model of integrity and dedication. He had a strong work ethic and a deft hand for designing, building and restoring. Among family, he was known as Mr. Fix-it: he could repair anything. He is also recalled as an amateur magician who would regularly discover pennies in his mystified grandchildren's ears and then make the coins disappear into thin air. Ed was happiest in the presence of his family. In addition to his beloved wife Patricia, Ed will be lovingly remembered by his children and their spouses, Connie (Paul), Amy, Audrey (John) and Edmund III (Lori), and by his grandchildren Dana Katherine, Jennifer, Alison, Charles, Abigail, Edmund IV and Spencer. He also leaves his favorite cousin, Betty Green, with whom he shared a special relationship throughout his life. Ed's family would like to express their deepest gratitude to everyone at the Veterans Administration Medical Center of West Haven, and especially to the staff of Building 2, 3rd Floor West and the Emergency Room, for the outstanding compassionate care they provided throughout Ed's life and at his passing. Private funeral arrangements for the family are entrusted to Beecher and Bennett Funeral Service, Hamden, CT. Donations in honor and celebration of Ed's life may be made to the charity of one's choice.