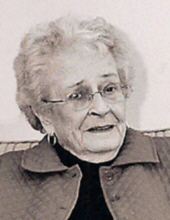 Edna T. Golden, 96, magazine executive assistant, teacher, education administrator, aunt, devoted fan of UCONN Husky Women's Basketball, and outspoken Republican died on Tuesday, April 22 at Masonicare Health Center in Wallingford, CT, following a year of failing health. She had lived at Ashlar Village since 1997, enjoying easy contact with many lively friends. She loved a good party. Prior to her retirement years in Connecticut she lived in Akron and Columbus, Ohio, and New York City. Born in Philadelphia, Edna graduated from Larson Junior College, now Quinnipiac College, in 1937. She became Editorial Assistant at Parade Magazine, a Sunday supplement, then Executive Assistant at McCall's Magazine, both in New York City. It was during her time in New York that she met and married her husband, James B. Golden, a reporter and public relations man. Her years in Akron included graduating from the University of Akron with a BS in education in 1957 and a MS in education in 1966. She devoted herself to teaching and thought of her students as her family, sending them postcards from summer excursions and bringing them gifts. She became Supervisor of Elementary Education for the Ohio Department of Education in 1971 and served there until 1979. Lively, opinionated, and interested in the comings and goings of the world, she was a life-long learner whose questioning only started to fade in the last year of her long life. Predeceased by her parents, George and Mary Jane Taylor, and husband, she leaves two nieces, Susan McKeon of Hamden, Connecticut, and Nancy Rayner of New Brunswick, Canada, and their families, and long-time and devoted friends, the Bowerman family. Friends are invited to attend her Memorial Service on May 24th, 2014 at 11:30 AM at Ashlar Village, Wallingford, CT. Arrangements are in care of Beecher & Bennett, 2300 Whitney Ave, Hamden. Donations in Edna's memory may be made to the Masonic Charity Foundation, PO Box 70, Wallingford, CT 06492.