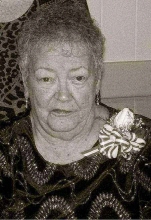 Edna Grace Harger Winter, 78, of Naugatuck, wife of the late Russell Winter passed away June 8, 2015 after a brief illness. She was born in New Haven, February 19, 1937 a daughter of the late Donald L. and Lois Mayer Harger, Sr. and had been employed by the L.H. Brenner Insurance Co. Edna was an active member of the Naugatuck Elks Club # 967 and was named the Elk of the Year in 2011. Sister of Donald L. (Chickie) Harger, Jr., Carol Harger Senerchia, Jaquelyn Harger Hurlburt, and Geraldine Harger (Paul) Rosenberg. She is also survived by several nieces, nephews, grandnieces and grandnephews. Services are private and under the direction of Beecher & Bennett Funeral Home 2300 Whitney Ave., Hamden.