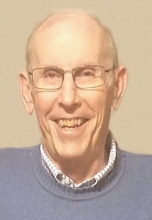 Edward Albert Thompson (Ed, “E.T.”) passed away after a short illness on Saturday, July 8, 2017 at Yale-New Haven Hospital, St. Raphael Campus in New Haven, CT. He was born in Avon, CT on March 17, 1939 and grew up there on the family farm with his parents, the late Albert and Vesta Thompson and 5 older sisters. He attended Pine Grove School, a one-room schoolhouse across the road from the farm, through the 4th grade. The schoolhouse is now operated as a museum by the Avon Historical Society and is open to the public. Ed attended Denison University (B.A., 1961) and University of Delaware (M.A., 1963 and Ph.D, 1966). He joined the United States Air Force in 1965 and taught psychology at the Air Force Academy in Colorado until he was honorably discharged as a Captain in 1968. He retired in 2008 from Southern CT State University as a Full Professor, Professor Emeritus of Psychology, having taught in the Psychology Dept. for a full 40 years! Teaching was a lifelong passion for Ed; the enthusiasm with which current and former students would greet him out in the community (dining out, shopping, traveling) testifies to how deeply he connected with them in the classroom. His 40 years at SCSU were also marked by deep mutual respect, admiration and friendship between Ed and his many colleagues, staff and teachers alike. After his retirement, Ed established the Thompson Family Endowed Scholarship at SCSU to help students majoring in Psychology who are the first generation in their family to attend college, as he was. Ed was also passionate about vanilla ice cream, UConn women’s basketball, the Boston Red Sox, visiting and staying in touch with far-flung family, playing bridge, genealogy, the stock market,reading, Civil War history, going to Camp Winni on Lake Winnipesaukee in New Hampshire every summer, music and theatre, Lean Cuisine dinners (no muss, no fuss, no culinary surprises) and having a glass of milk with just about every meal. Above all, the strong relationships he built and sustained with family, friends and students were the most important accomplishments of his life. All were drawn in by his warm, easy and ever-present smile, and kept close by his engaging and thoughtful conversation and his enthusiastic laugh and sense of humor. Ed has now joined beloved family and friends in God’s own home, including his parents Albert and Vesta, and sisters Ruth Thompson, Gladys August, Marian Thompson, Eunice Champagne, and Audrey Thompson. He leaves on earth his daughter Susan Elaine Gould, her husband Mark Gould and children Rose, Sam and Max Gould; son James Edward Thompson, his wife Janice Lloyd Thompson and children Matthew and Kade Thompson; 8 nieces, 1 nephew, 8 grandnieces and 7 grandnephews; numerous cousins and extended family; and countless friends who will forever keep his smile safe in their hearts. A celebration of Ed’s life will be held on Saturday July 15th at 10:30a.m. at the West Avon Congregational Church 280 Country Club Rd. Avon, CT 06001. In lieu of flowers, donations in his name may be made to SCSU Foundation (in memory of Edward Thompson), 501 Crescent St. New Haven, CT 06515, or to NNESRE (Camp Winni) Scholarship Fund, c/o Leslie Dockendorff, Business Manager, 488 Quinnipiac Ave. North Haven, CT 06473. His family asks that written condolences be sent to 25 Hamden Hills Dr. #70 Hamden, CT 06518.