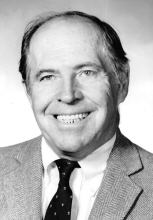 Edward F. Gorman, Jr., 87, of Hamden, husband of the late Mary Jane Anderson Gorman, passed away at CT Hospice in Branford on February 16, 2018. Born in New Haven on June 29, 1930, he was the son of the late Anne Carrignan Gorman and Edward F. Gorman, Sr. He is survived by three children; Karen Ann Galluzzo (Robert) of Meriden, Edward F. Gorman III (Joanne) of Killingworth, and Carl W. Gorman of Hamden, and five grandchildren; Michael and Krystina Galluzzo, and Lindsay, Kevin, and Patrick Gorman. He was predeceased by his daughter Deborah Ann, and brothers Robert L. and Donald J. Gorman. Edward was a graduate of Quinnipiac University and of the School of Executive Development at the University of New Haven. He attended many courses related to water supply operations conducted by the American Waterworks Association, University of Connecticut, and Virginia Tech. He started working for the former New Haven Water Company in 1948 in the Engineering Dept., and retired from the Regional Water Authority as Manager of Distribution Operations in 1999, after 51 years of service. He was a life member of the American Waterworks Association, and the Hamden Carmel Council #3605 Knights of Columbus. He served as Secretary-Treasurer of the former International Management Council of Greater New Haven, was an advisor for the Junior Achievement of Greater New Haven, and was actively involved in Hamden Father Baseball and Youth Hockey. Ed was an active member of Hamden Elks Lodge #2224 and served as its President from 2003-2004. He also acted as the Community Activities and Youth Activities Chairman. He was recognized by his peers as 'Elk of the Year' in 2006. Ed was also a member of the Irish American Community Center, and New Haven Gaelic Football and Hurling Club. A proud U.S. Army Veteran, he served his country during the Korean War, and held memberships in the American Legion Hamden Post 88, and the V.F.W. Post 7330. Funeral from BEECHER & BENNETT, 2300 Whitney Ave., Hamden Thursday, February 22 at 9:30 AM. Mass of Christian Burial will be celebrated in Our Lady of Mt. Carmel Church at 10 AM. Friends may visit with his family Wednesday evening from 5-8 PM. Interment with military honors in All Saints Cemetery. In lieu of flowers, memorial contributions in his name may be sent to CT Hospice, 100 Double Beach Rd., Branford, CT 06450.