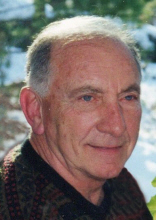 Edward G. Parcella, age 88, of Hamden, passed away at Whitney Manor on December 14, 2014. He was the beloved husband of 64 years to Dolores A. McGillivray Parcella. Born in New Haven on July 20, 1926, he was a son of the late Frank and Philomena Gaetano Parcella. Besides his wife, he is survived and will be missed by his two daughters; Pamela (Robert) Holden of Colchester and Patricia Esposito of Hamden, three granddaughters; Alicia Esposito, Jennifer (Greg) Little, and Julie Ann (Tim) Belcher, seven great-grandchildren, Dylan Algarin, Amanda and Emily Istas, Olivia Little, Tanner, Mack and Chloe Belcher, and five nieces & nephews; Raymond Jr., Valerie, Deborah, and Robert Parcella and Leslie Bernardini, who was also his goddaughter. He also leaves behind a sister-in-law, Louise Parcella. He is predeceased by his brother Raymond Parcella, sister-in-law and brother-in-law, Virginia McGillivray Bernardini and Arthur Bernardini, and his son-in-law George Esposito, and a neice Suzanne Bernardini. He was a Sales Manager at American Linen Supply Co., a graduate of Arnold College, where he had played on the basketball and softball teams, and a member of the Hamden Italian-American Independent Club. Funeral service will be held on Wednesday, December 17 at BEECHER & BENNETT, 2300 Whitney Ave., Hamden at 12:00 noon. Friends may visit with his family Wednesday morning from 10:30-12:00, prior to the service. Interment to follow in Centerville Cemetery. In lieu of flowers, contributions in his memory can be made to VITAS Community Connection, c/o VITAS Innovative Hospice Care, 199 Park Road, Ext., Suite 102, Middlebury CT 06762.