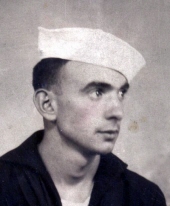 Edward J. Cavazuti, 88 years old, lifelong resident of Hamden, passed away after a short illness on October 25, 2009 at St. Raphael's Hospital. He was born on July 28, 1921 in Hamden to the late Bonfiglio Cavazzutti and Severina Benatti Cavazzutti. Edward is survived by his sons and daughters-in-law; Edward J. and Joan Cavazuti of Tampa, FL, Michael Cavazuti of San Diego, CA, Stephen and Ann Cavazuti of Ridgefield, CT and David and Becky Cavazuti of Cheshire, CT; nine grandchildren, Anne, James, Megan; Daniel and Michelle; Lisa, and Thomas; Emily and Jennifer; sister, Gloria Filipowich of Seymour. Edward was predeceased by his brother Albert Drapo, and sisters Jennie Zucchi, Dolores Hromadka, Addie Cavazuti, and Beatrice Coughlin. Edward graduated from Hamden High School, class of 1938. He also completed some college courses at Stone Business College. Edward had been employed by the Town of Hamden for over 40 years as the Administrative Assistant to the Mayor, retiring in 1979. Starting in 1942, he proudly served his country for four years as a Seaman first class in the US Navy aboard the U.S.S. Hancock that was engaged in the Pacific theatre during WW II. He had a love for ice hockey as a boy skating on Mill River and continued through the Hamden High Hockey team during his high school years. He was an avid and accomplished golfer, saltwater surfcaster and ballroom dancer. In his later years, he enjoyed breakfasts with his children and grandchildren at The Brownstone House Restaurant in Hamden. Edward was also a member of the Elks and The Luna Social Club Inc. of Hartford. Funeral Service will be private. Arrangements in care of BEECHER & BENNETT, 2300 Whitney Ave., Hamden.