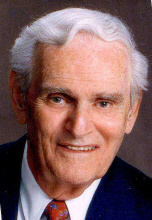 Edward James Luppi, age 87, departed this life on January 24, 2012 surrounded by his loving family. He is survived by his wife of 60 years, Norma Rivolta Luppi and his three children; daughter, Giannina L. Luppi of Hamden; sons, Edward J. Luppi II and his wife Deborah of Goffstown, NH and Christian R. Luppi of Hamden. He also leaves his three cherished granddaughters, Christina of Nottingham, NH, Marissa (Lt. Bridger, USMC) Leary of New Bern, NC, & Dana of Goffstown, NH; two sisters-in-law, Gertrude K. Luppi & Elia R. Kopjanski both of Hamden and many nieces and nephews. Edward was born on November 26, 1924 on Helen Street in Hamden, son of the late Joseph J. and Louise Godino Luppi. Besides his parents, he was predeceased by his sister Eleanor L. Beurer, her husband Fredrick & his brother Joseph J. Luppi Jr. He was a 1942 graduate of Hamden High School, a WWII US Army Air Corps Veteran, and graduated from Purdue University in 1949 with a degree in Aeronautical Engineering. Upon graduation he worked at the former Sholhorn and Sergeant Companies in New Haven as an engineer. He was the President of the Rivolta Construction Company and became a Construction Manager, working for the former W.J. Megin and Edwin Moss Construction Companies. For twelve years he was the Director of Physical Planning at Brown University, overseeing all construction and renovation on the University's campus, retiring from that position in 1992. Among the noted buildings built under his direction were the Yale Health Center, the renovation of the Yale Medical School, the Masonic Home and Hospital (Ramage Building & Wooster addition), the Brown University Geology & Chemistry Laboratory, the Computer Science Laboratory and the Brown Crew Boathouse. Among the things that he loved were Classical Music, Italian opera, gardening, landscaping and traveling. He and his wife traveled extensively throughout Europe and had many memorable trips back to his native Italy, on two occasions with his children and grandchildren. Funeral from BEECHER & BENNETT FUNERAL HOME, 2300 Whitney Ave., Hamden, on Saturday, January 28th at 9:15 A.M. A Mass of Christian Burial will be Celebrated at 10:00 A.M. in Our Lady of Mt. Carmel Church, followed by interment in Centerville Cemetery. Friends may visit with his family on Friday, evening from 5:00 to 8:00 P.M. at the funeral home. In lieu of flowers, memorial contributions may be sent to the St. Raphael Foundation, 1450 Chapel Street, New Haven, CT 06511 or Masonicare Hospice, 22 Masonic Ave, Wallingford, CT 06492.