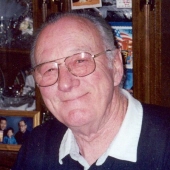 North Haven - Edward M. Bevins, 82, husband of Nellie Bevins passed away at home on Friday, May 22, 2009. He was born Sept. 28, 1926 in New York, NY to the late Patrick and Mary (Devaney) Bevins. He proudly served in the U.S. Navy during World War II as a Naval Armed Guard. Ed was a Hamden fireman for 11 years and then worked for Pratt & Whitney Aircraft retiring after 28 years. He was a member of the Wallingford YMCA. In addition to his wife he is survived by three sons, Edward Bevins of Wallingford and Dennis and Timothy Bevins both of Fullerton, CA, a sister; Theresa Bevins of Hamden and a brother, Daniel Bevins of Hamden. He also leaves seven grandchildren, Tara, Ryan, Brandon, Jack, Harrison, Connor and Christopher Bevins. He was predeceased by his first wife, Sylvia Zucchi, his second wife, Lynn Stone and a brother, Jerry Bevins. A Mass of Christian burial will be celebrated on Tuesday, May 26, 2009 at 12 noon at Our Lady of Mt. Carmel Church, Hamden. Burial will follow at St. Mary's Cemetery, Hamden. Relatives and friends may call at BEECHER & BENNETT, 2300 Whitney Ave., Hamden on Tuesday, May 26 from 9:30-11:30 a.m., prior to the Mass. Contributions in Edward's memory may be made to the Wallingford YMCA, 81 South Elm St., Wallingford, CT 06492.