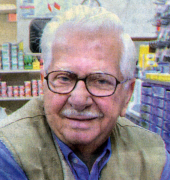 Edward “Ed” Novak, 93, of Sun City Center, FL, previously of Hamden, husband of the late Gene Richard Novak, passed away on December 30, 2017. He was born on December 10, 1924 to the late John and Nellie Sievzega Novak. Ed is survived by his son-in-law, Bill Maturo of Cheshire, and many nieces and nephews. Besides his wife, he was predeceased by his daughter, Diane Maturo, and sister, Jean Cifaldi. In 2009 Ed retired after 38 years from Centerville Lumber as a hardware and lumber salesman. He had always loved talking with customers and telling jokes. During his retirement he enjoyed traveling all over the world. A Graveside Service will be held on Friday, January 26th at the Mt. Carmel Cemetery at 11:00 A.M. BEECHER & BENNETT, 2300 Whitney Ave., in care of arrangements. Contributions in Ed’s memory may be sent to St. Ann’s Soup Kitchen, 930 Dixwell Ave., Hamden, CT 06514.